Captain Daniel Bennett spends his summers sailing out of Rockland Harbor, where he offers day trips on Bufflehead, his refurbished, six passenger sailboat. The father of two gives families a chance to create the sea faring adventure of their choice, sailing anywhere between one hour to a full day. The fee for adults to sail is modest, and for children, Daniel simply charges by age per hour. For these reasons, coupled with the opportunity to see the mid-coast from the water, we decided Bufflehead would be just right for our crew. 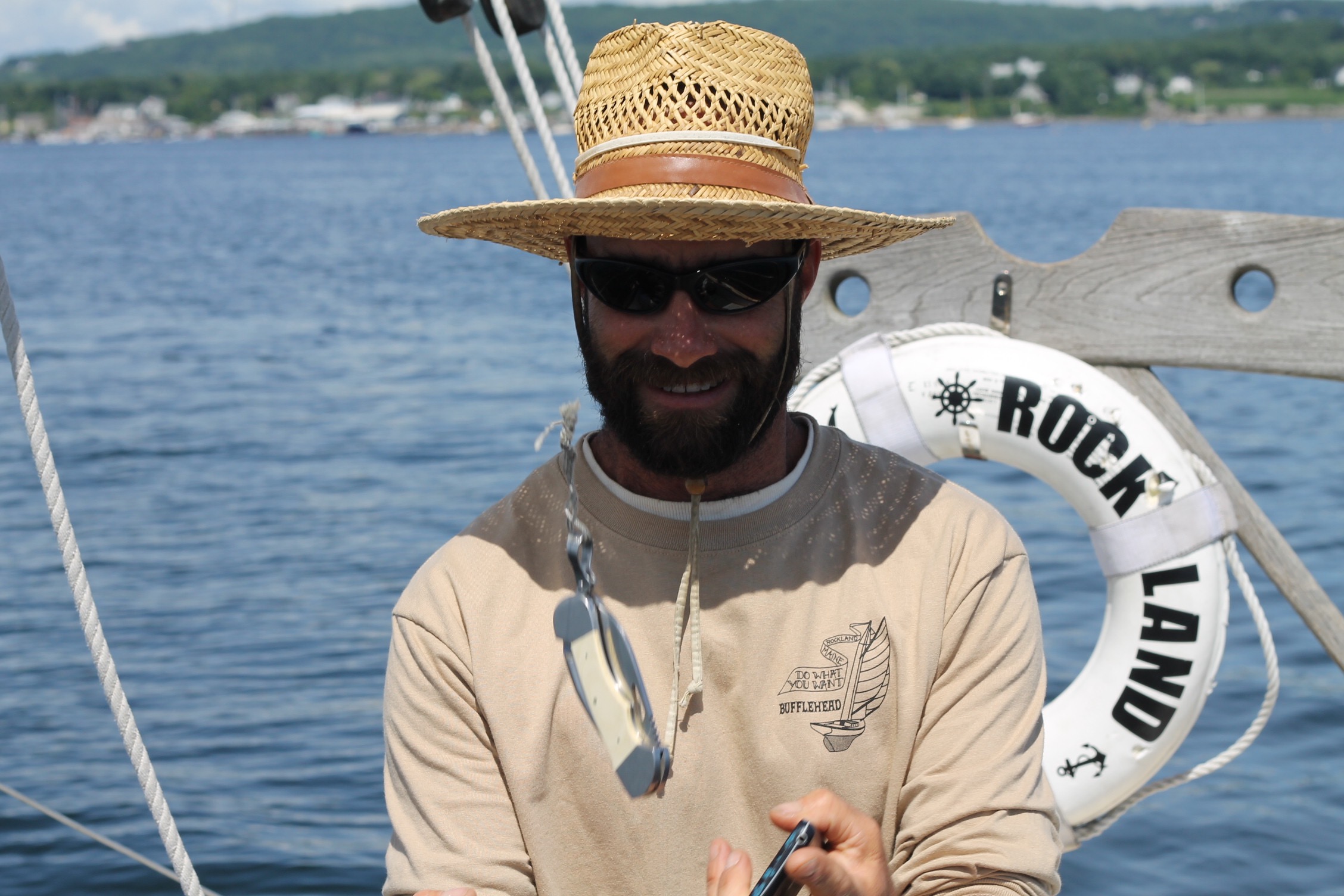 A captain who juggles? Right on.

We arrived on the dock at 10 a.m., lugging a cooler of snacks, drinks, and sandwiches along with a bag full of extra layers and sunblock. Daniel’s seven-year old daughter Raya and a recent college grad named Kat made up the crew. Our captain asked Raya to raise the sails, and she did so with the skill of a seasoned sailor, never questioning her father’s instruction. Kat, who is studying to get her captain’s license, told us she regularly volunteers to help on Bufflehead, sailing any chance she gets. 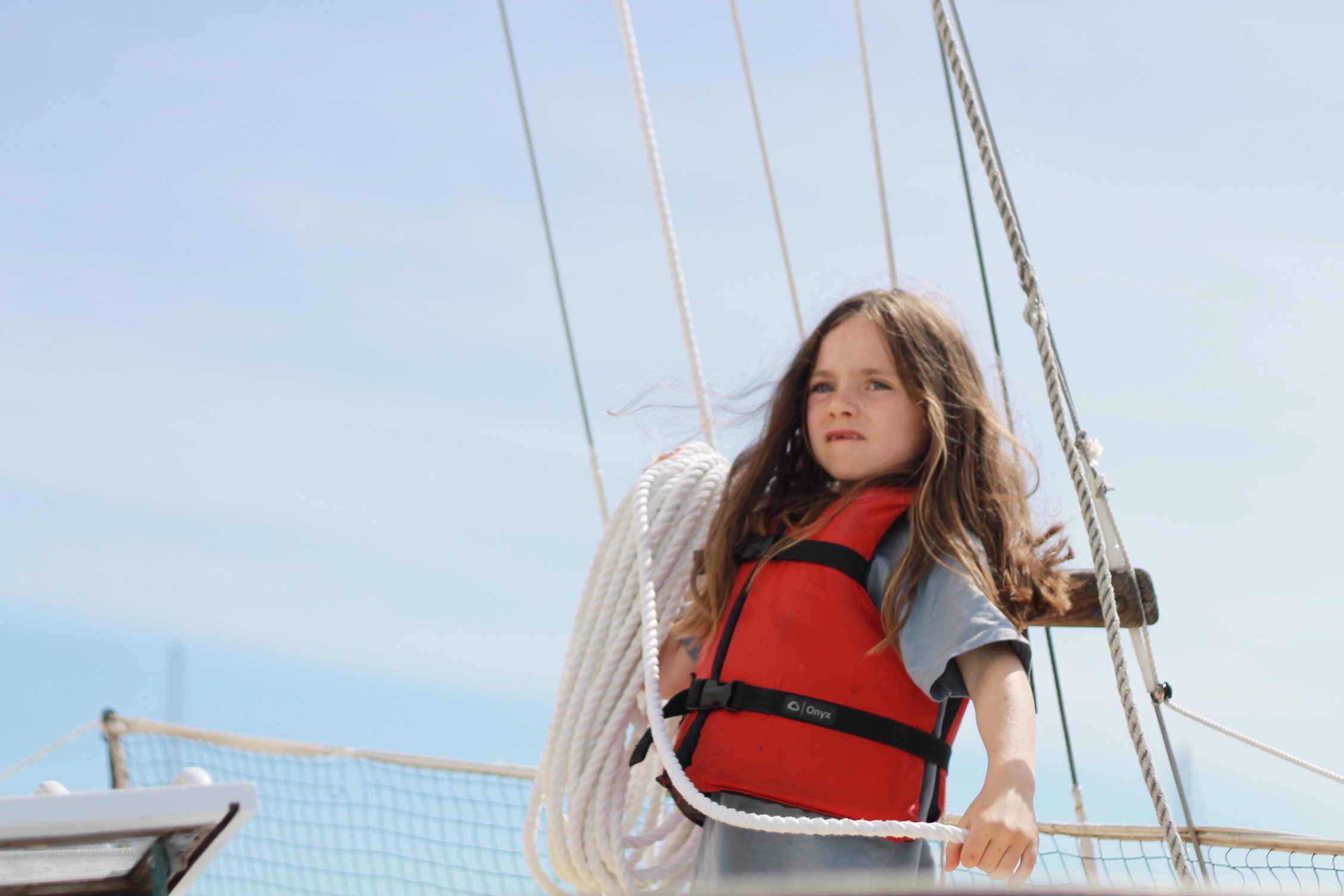 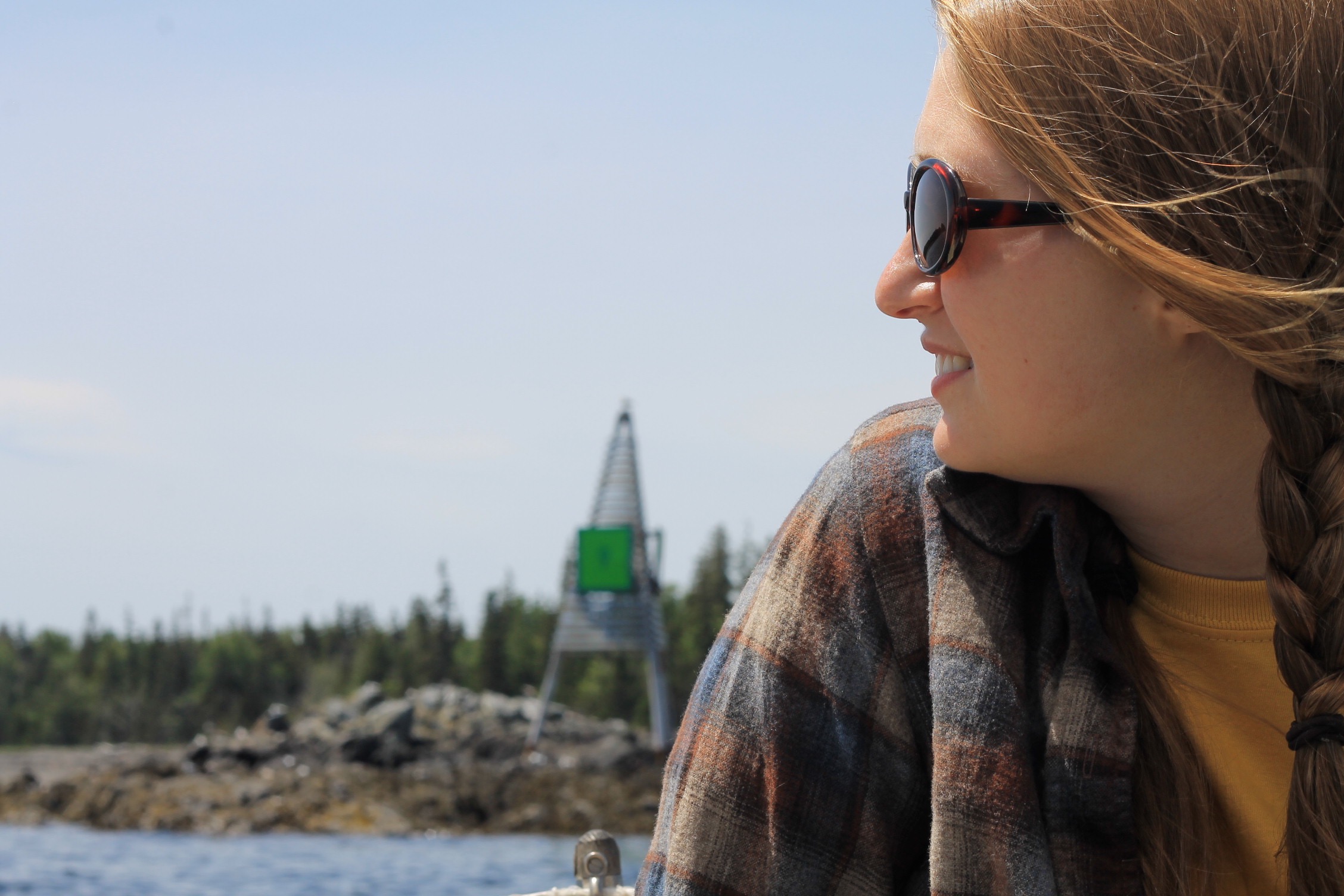 Kat volunteers on Bufflehead to earn hours for her captain’s license.

Our trip out of the harbor was a slow-going at first, but after some brief help from the motor, we caught a steady breeze. We chatted with Daniel, and learned he began building boats at the age of 11 and began a life at sea at 16. His travels have taken him to Ireland, the Caribbean, and beyond. All totaled, he has logged 100,000 nautical miles at sea, which he says is enough to travel around the world. 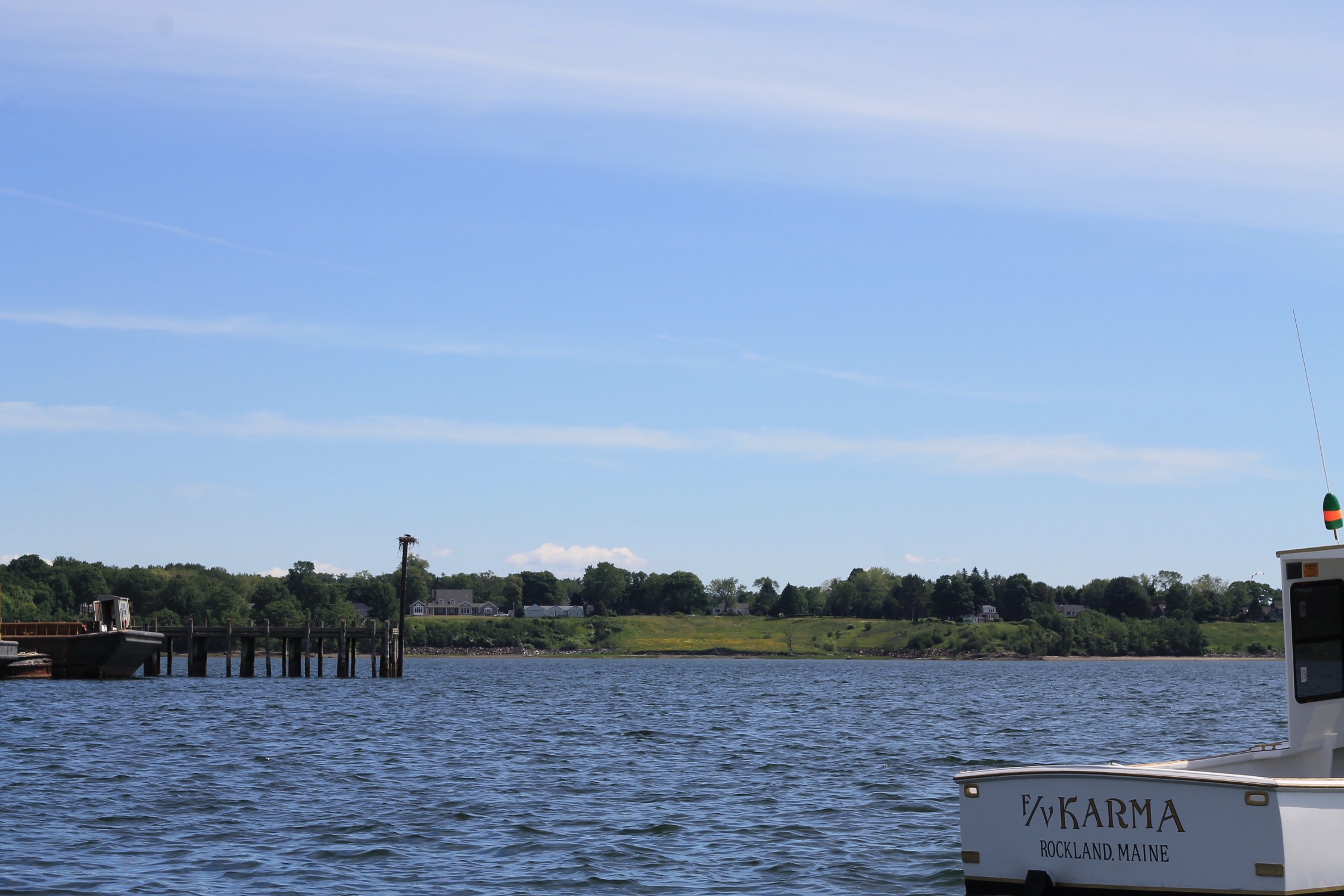 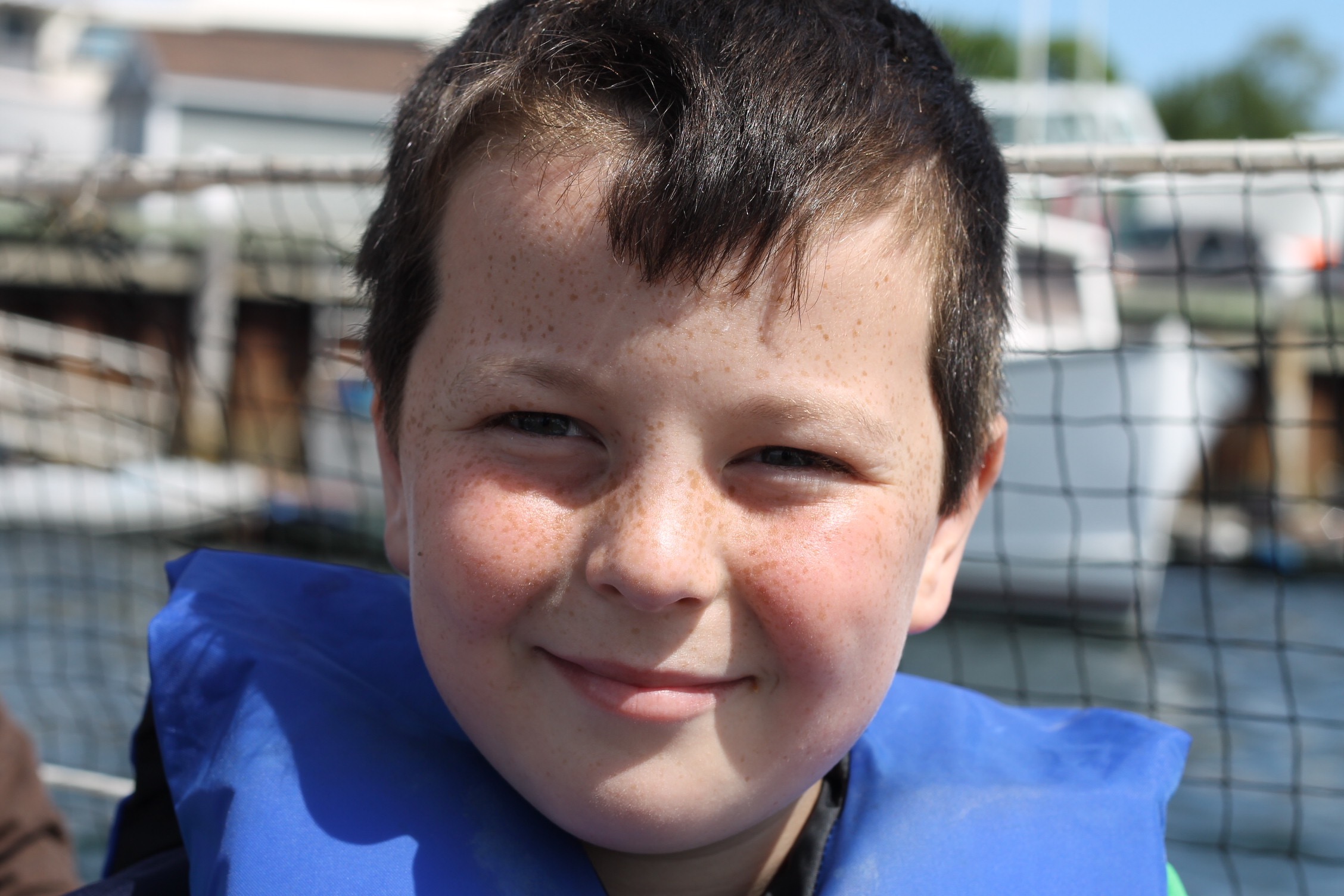 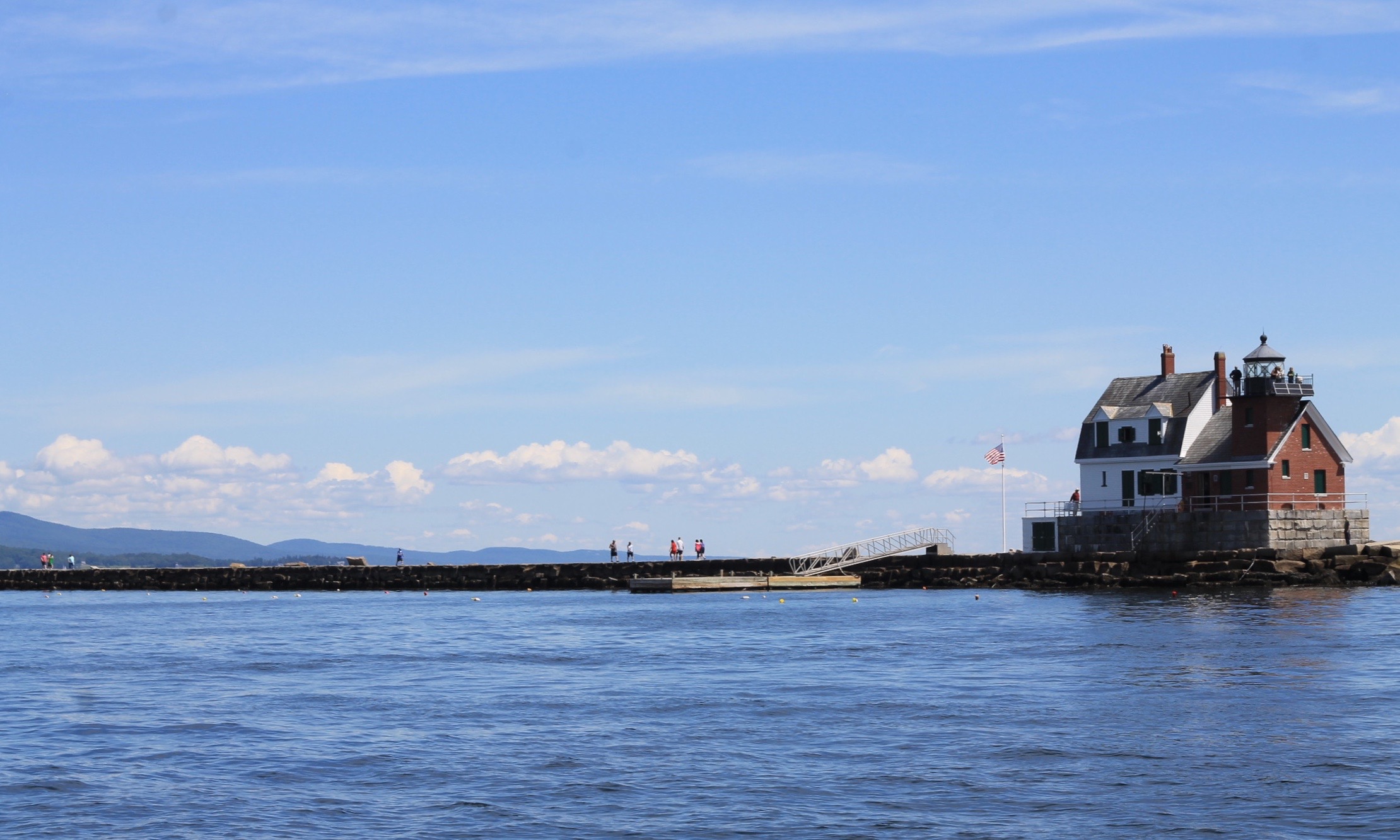 After settling in Rockland, Daniel received Bufflehead for $1 from a local family who admired his boat building expertise and passion for sailing. The stipulation? Daniel needed to restore Bufflehead within a year’s time. He spent a long winter working on the wooden sailboat before bringing it back to its former glory. 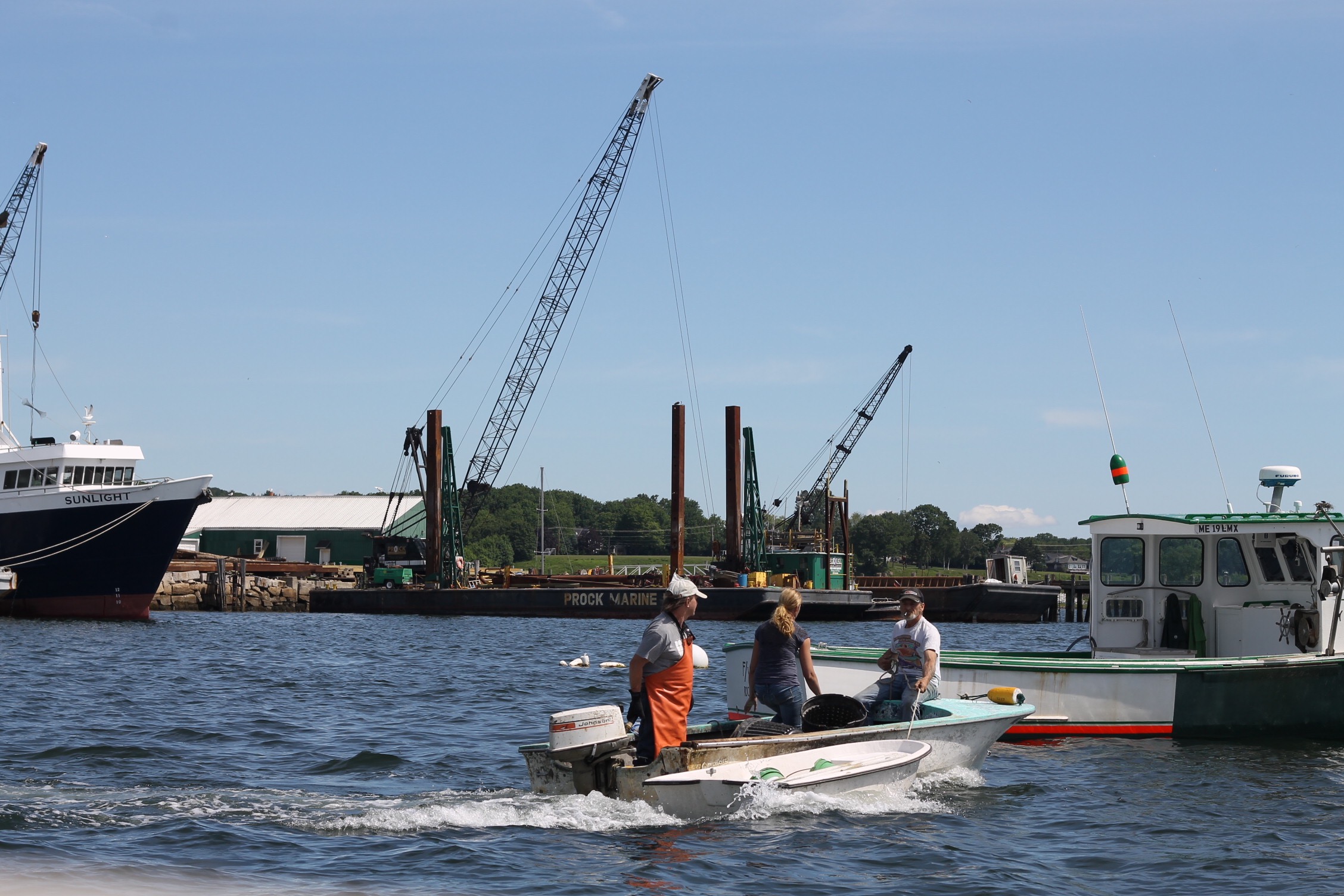 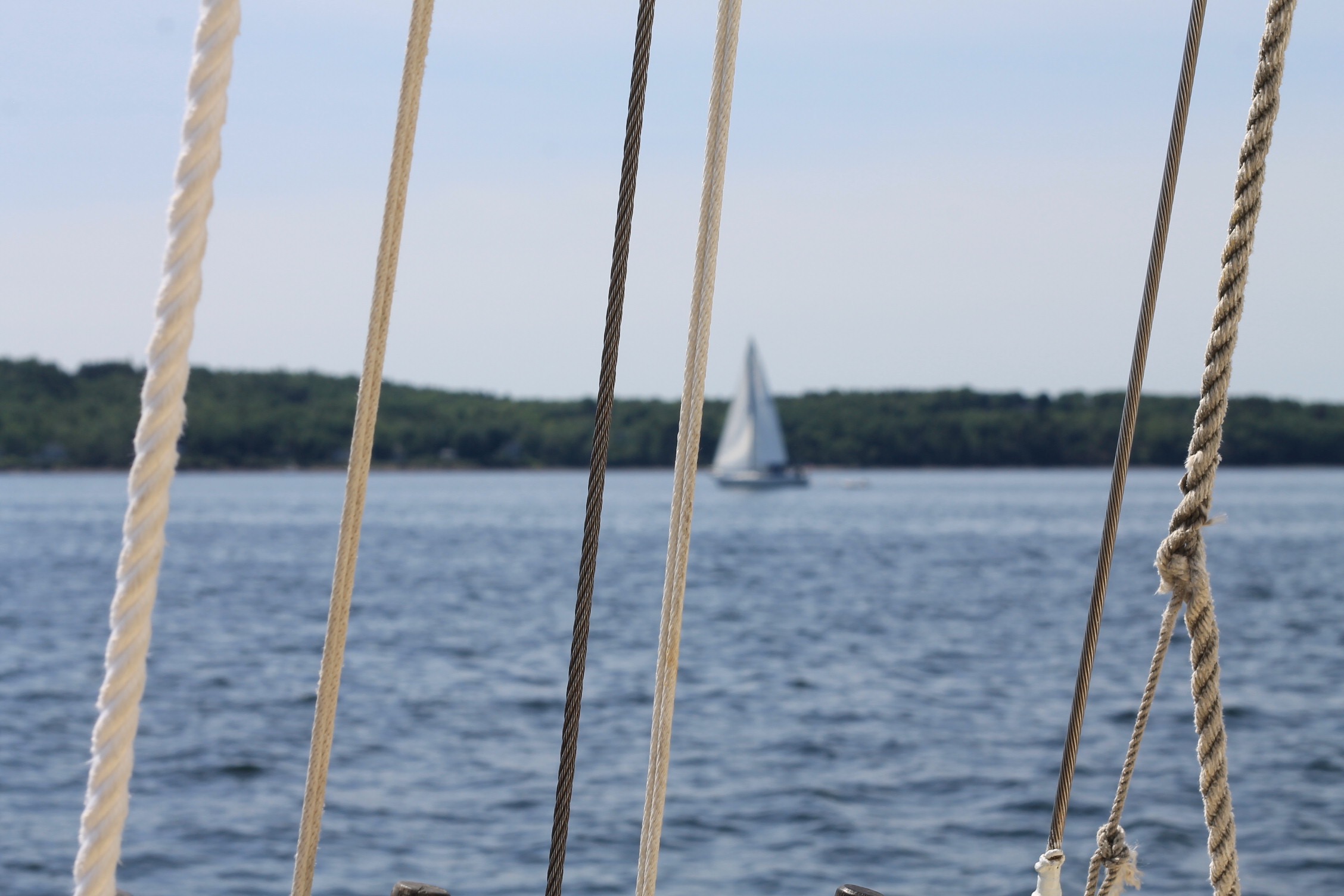 Our four hour trip on Bufflehead took us past Rockland Breakwater Lighthouse, Owl’s Head State Park, and the island of Islesboro. A couple from Oklahoma, who joined us for the sail, caught sight of a porpoise swimming alongside the sailboat. Later on, DP#1 pointed to the sky, where a Bald eagle soared overhead. We also spotted impressive schooners, lobster boats pulling traps, and more vessels out enjoying the water. MP never imagined our sail would provide so much to see. 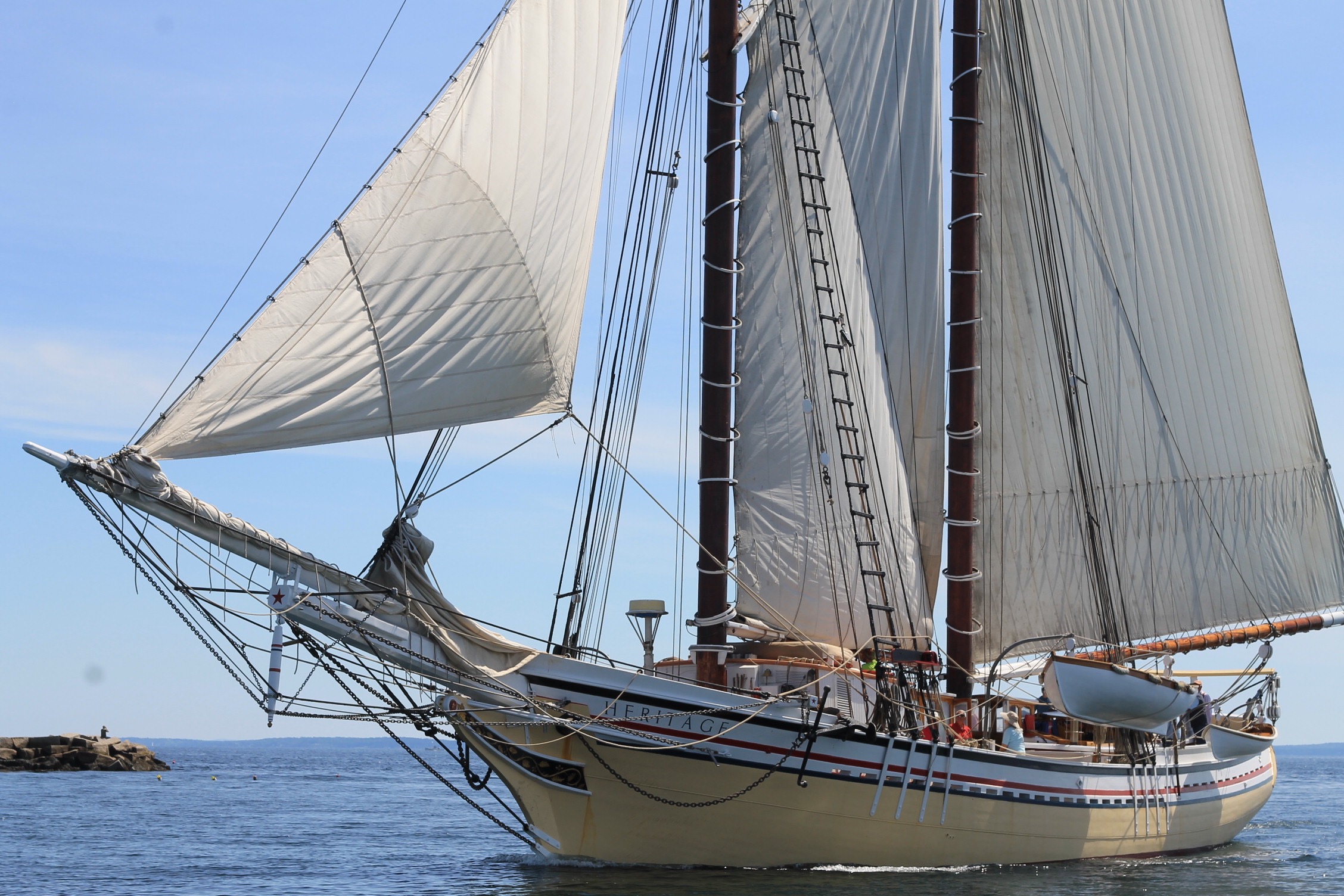 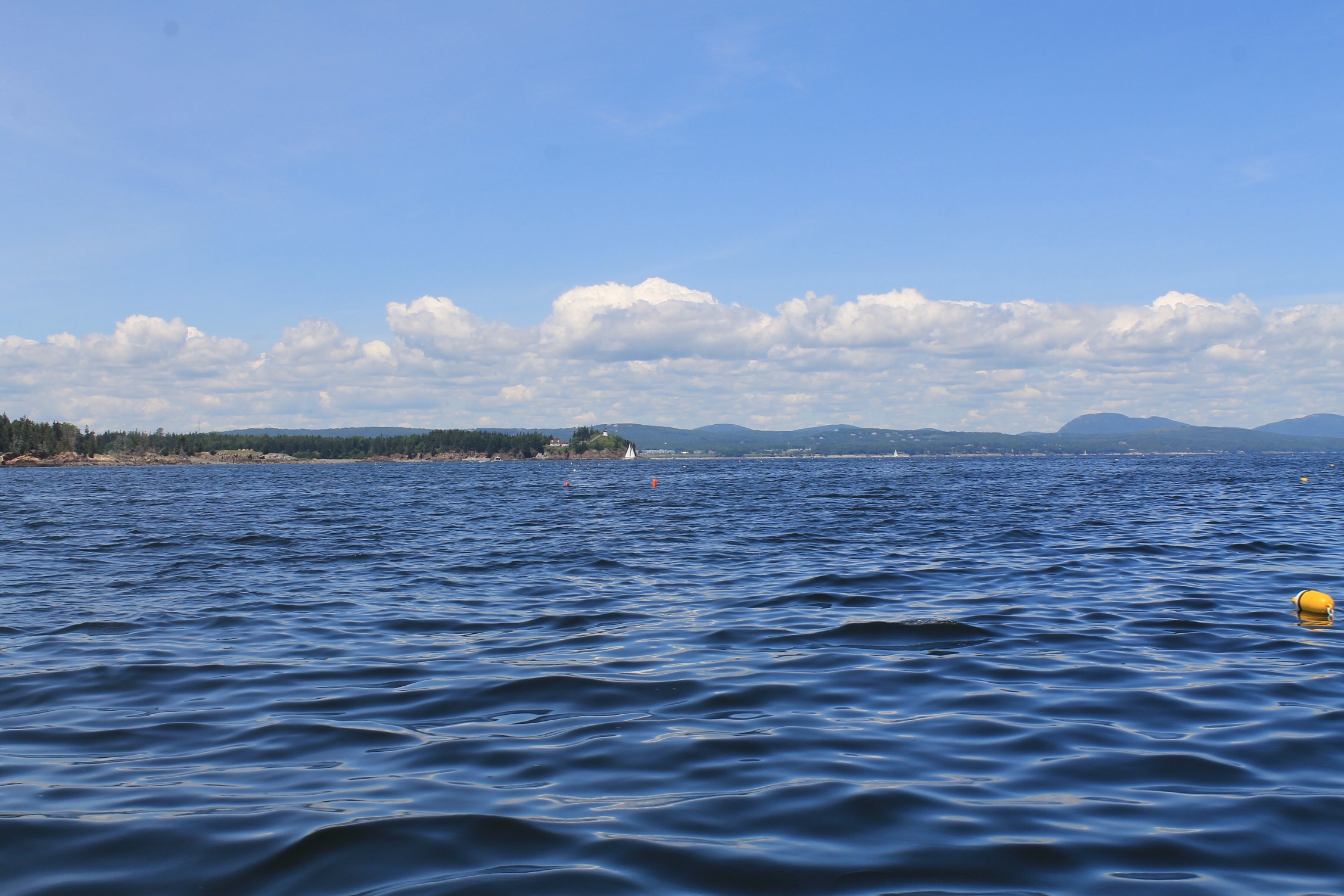 Further out, the wind picked up and all of us added layers. The open water sparkled in the sunlight and the sound of the sea breeze hitting the sails sent us all drifting into our own thoughts. Daniel hummed a chant… “wind, wind, wind… “ and  told us he makes up silly wind songs to keep the boat going. 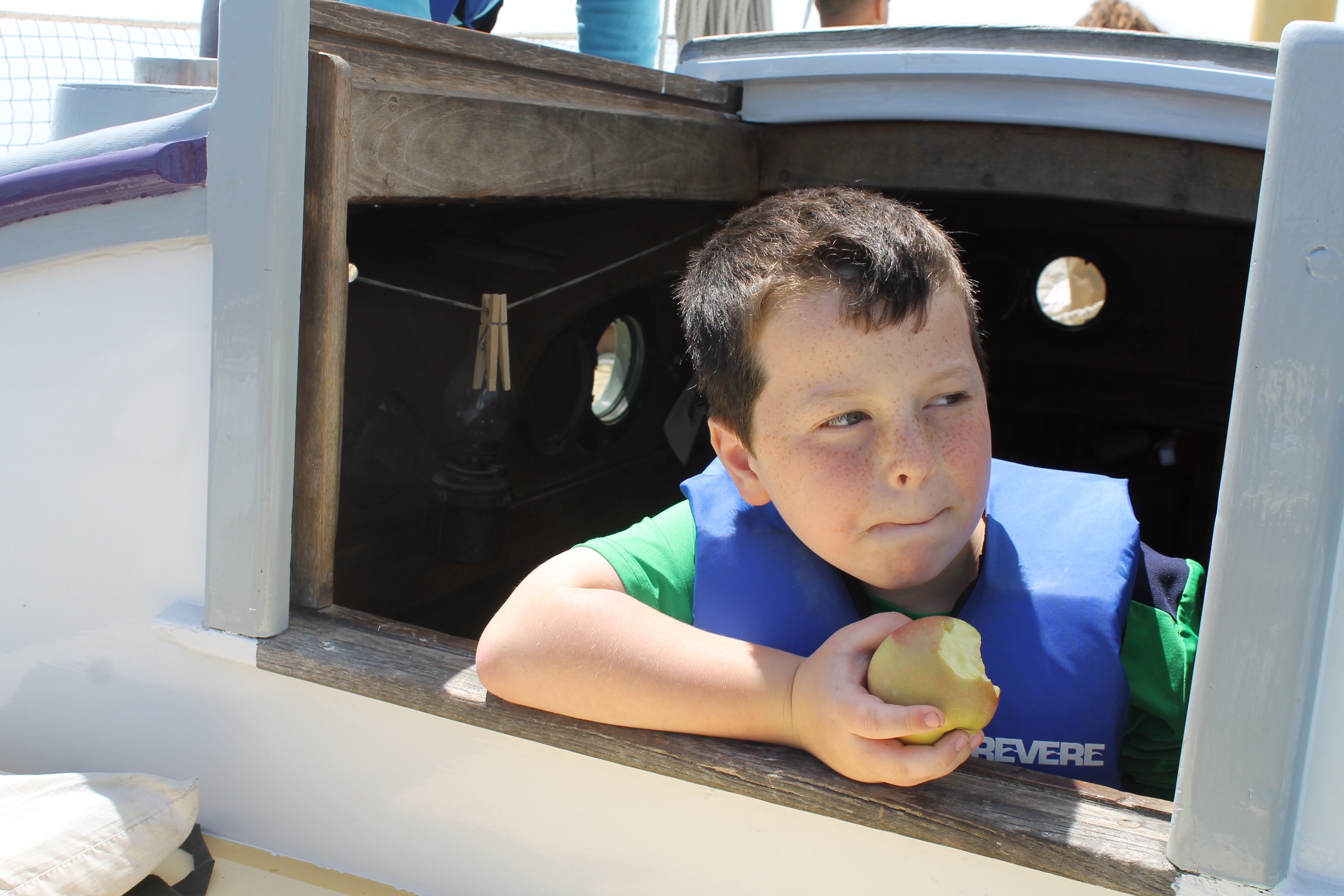 The combination of sun and wind made CP#2 a bit sleepy, so Kat kindly made room for him below deck. He was content to have his own cozy space for awhile, but it wasn’t long before he climbed up to join us again. Although he’d never admit it, CP#2 couldn’t resist staying below deck when there was so much beauty above —islands rich with evergreens, a sandbar Daniel called Maine’s own Caribbean, and a vast blue sky. 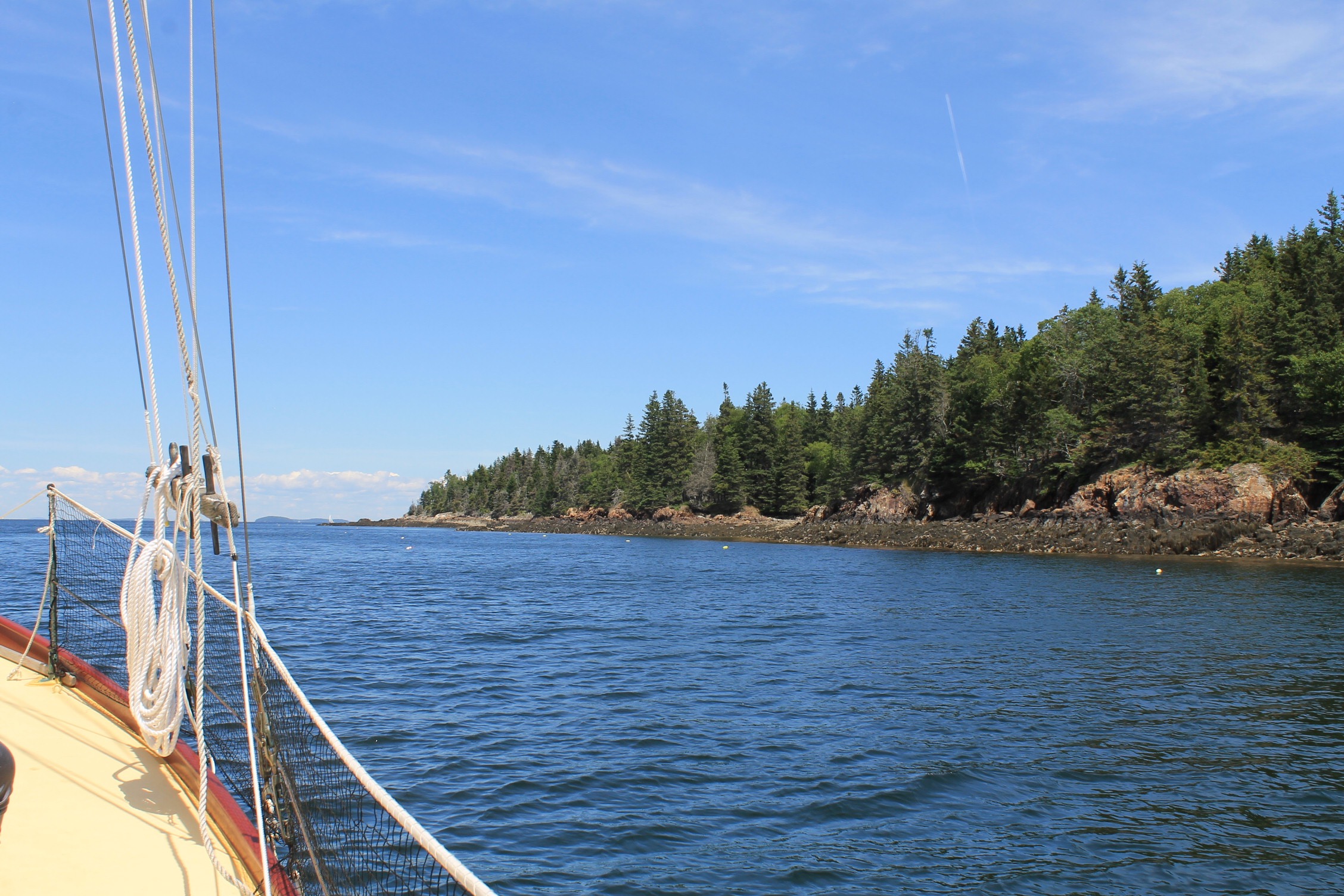 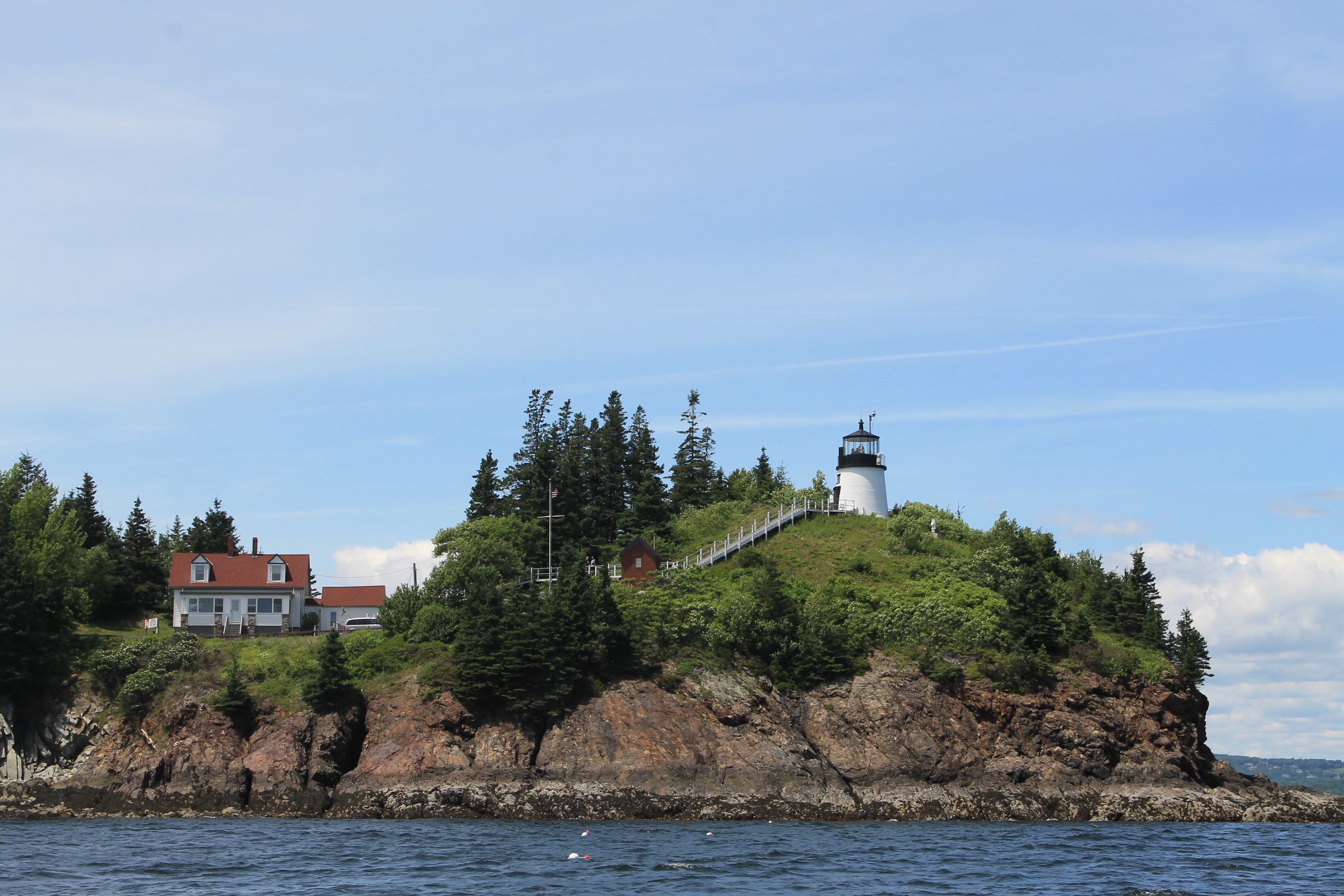 The trip was so peaceful, MP forgot all about the time. Four hours went by in a flash. Daniel says a day on the water is like a week’s vacation, and MP would have to agree. We left with windswept hair, rosy faces, and the taste of the sea on our lips. Maine is beautiful by land, to be sure, but from the water in the summertime, our state is pure magic. 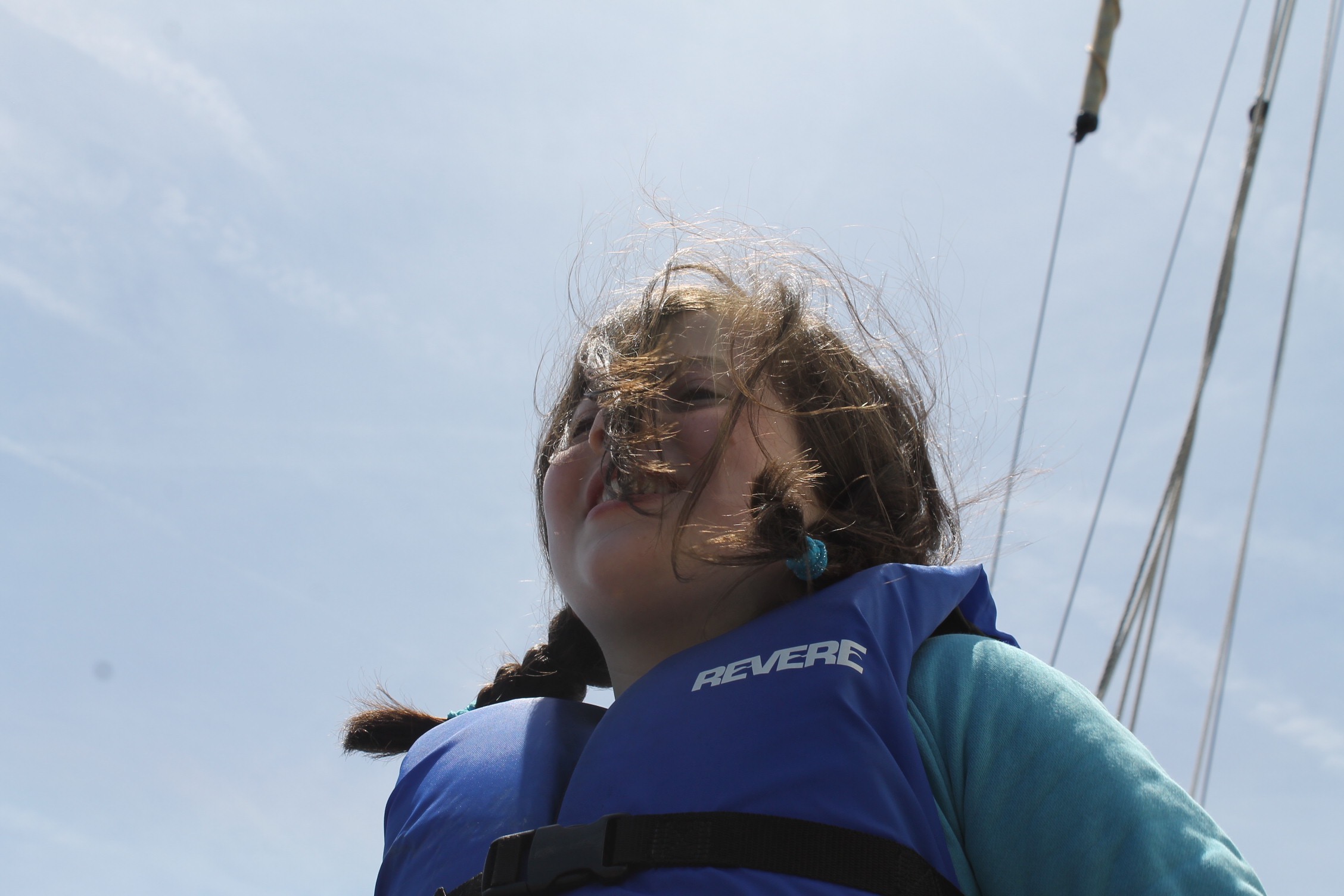 Many thanks to Captain Daniel, Kat and Raya for the experience! To learn more about Bufflehead Sailing Charters, visit here.